Back to all posts

Once I realized that the actual improv going on was just over a C-pedal, I was curious to know what kind of material Bud would play.  Generally it's melodic, beboppish, but the adventurous parts are especially exciting.

Click here to hear his solo slightly slowed down.

Click here to hear his solo on Alt take 1.

Click here to hear his solo on Alt take 2.

Instead of writing a huge analysis of these solos, and how they compare, differ, etc, I thought I would just point out some of my favourite juicy bits.  Even just picking a few moments (I restricted myself to ten) from these three revealing solos will easily make for the longest entry I have ever posted on this blog.


First of all- the opening of the solo on the final keeper take: 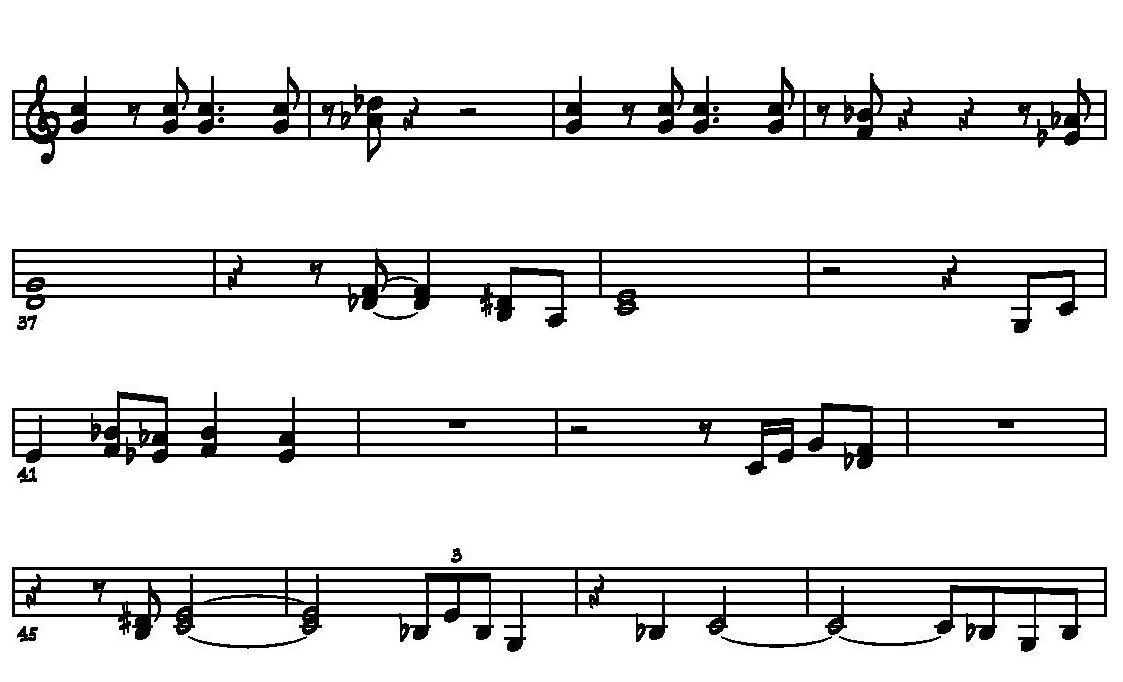 So with the bass doing a kind of C pedal with G and a passing Db, it feels like the door is open for some lines coming out of the dominants (G7 and Db7) and the tonic C-Major.  More importantly, this is a driving, rhythmic tune, so he starts the improv with some strong fourths, followed by crunchy thirds that form a harmonic version of surrounding to get to the tonic.  Notice how the ideas are not really abandoned, although it isn't a motivic development in a direct a -> a' -> b kind of way.

Often in the course of these solos he starts with a chromatic triplet down from D-B.  In terms of extensions, the ninth is the most inside one, but also doesn't get to the point where he sounds stuck on it- it sounds more like another idea being developed in different ways as opposed to a go-to starting place.  The line is all C-major scale through bebop passing notes until the end when he hits the E-F# major second, a bright shift to lydian.

This next line is really crunchy, but ends up coming out of lydian-dominant this time.  Also a quick motif is developed and then he moves on.

In this line that follows immediately, he goes from small and crunchy to wide and spacious.

The two phrases have a pentatonic sound- it's lydian, but one further, G lydian, with the C# as a further upper extension, like in the original melody of the tune.

One more bebop line from this solo.

This line is hard for me to explain.  The E-major sound in the second half of the first bar makes me think he's gone even further up the extensions, after adding the notes of D (F#, C#), why not keep going, (G#, D#)?  The A-majory beginning of the second measure seems like this might be the plan, but by the second half of that bar it's more of a C-dominant/C-major bebop hybrid again.  I think with the speed that it flies by it would be better to think of all the additional accidentals as parts of big picture enclosures, with the whole line tending downwards.  When it begins its climb back up again, it swings the opposite way, from dominant/diminished back into major/lydian.

In the earlier takes of this tune, I hear (although it might be my imagination) him coming in and out of focued concentration- that is, sometimes it sounds like he is just playing for himself since he knows there will be another take, maybe this one is even more of a rehearsal or a line check.  However, even if that were his attitude, that doesn't diminish the moments of unique creativity that he goes for that differ from the music that ended up on the final product.

In this kind of long pickup into the first alternate take's solo, the mode is the most C-majory of all of his lines.  Nice accenting of the major seventh and ninth so it isn't too triadic and vanilla sounding.

Here's a line from that take where he starts a bop line on the ninth as he did a few times in the final take:

This one ends on a minor third in F-minor, whoa!  Definitely more of a surprise than the major second interval he used to end a similar line above.  It seems the leap from C major to C lydian is less unsettling than the leap from C-major to F-minor, even if the interval being used is traditionally a more palatable one.  There are other moments where he ends lines with a major third in E and  E-F#-G#, a cluster of all three.

A big factor in my thinking Bud was ready to move on and try the tune again is the longer pauses between ideas, like he is looking around to see if everyone is good to try again.  When he finally brings the take to a halt with some slow playing, what results is one of my favourite bits in all of the solos.

I guess I like it because it's so different from the fast playing.  But also it is generally darker, resolving more from the flatter keys back up into C.  The harmonic movement from Bb - G - Db is pretty fresh sounding too, despite the fact that it is essentially traditional forward harmonic movement.

Just a few more snippets.  In the second alternate take, he approaches the more confident sound of the final take, but in some places plays so fast that it almost sounds like he's getting it out of his system.

One of my favourite licks is similar to one from the other alternate take, this kind of pentatonic one.

Mostly this was a piano-fingering thing.  Knowing the notes I would use my thumb on the C's, but improvising it, maybe he jumped up after each group of four, making the landings not-so-clean.  The energy level is higher that way, even if it feels less efficient.

Finally, I picked a crazy line with two-note stops mixed in.

The first lick is almost out of control, but then he takes that final two-eighth figure and develops that in a bouncy syncopated rhythm.

For the final installment of this project I want to record myself playing my version of the tune.  I probably won't write anything about that one.  Expect that in a week (or two).